Imagination is more important than knowledge.

Genius, in truth, means little more than the faculty of perceiving in an unhabitual way.  William James

Does the atom really have a central nucleus with electrons spinning around it?  Does it really look like the solar system?  Neils Bohr perceived this structure based on his experiments and his genius imagination.  Once he proposed this format it made sense to others who eventually challenged its accuracy, but is was the perception that led the science in its quest.  Science and biology is abound with perceptions and perspectives rather than absolute facts.

Perspective is a mental view or outlook, an extrapolation of what seems reasonable to the eye and mind, and when true, promotes direction and understanding.

A priority of The Common Vein is to provide a  perspective, mostly via artistic renderings in order to gain an enriched understanding.

A unique aspect of being human is the depth of our perspective and the degree to which it affects our lives. Without perspective, human life wouldn’t advance as we see it today.  Artists, poets, writers and actors deliberately use perspective, and their objective is to stir the imagination, and provide a learning experience.  In designing the program we have taken heed of the wisdom of  Albert Einstein who said that “Imagination is more important than knowledge.”

The purpose of this body of work which includes artwork, illustrations, collages poetry, historic perspectives, and medical text is to celebrate science and humanity through unique and varied perspectives, to stir the imagination, to enrich the study of biology and medicine, and to provide understanding of the world of biology in context. 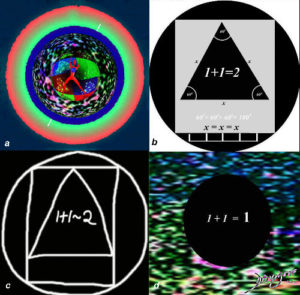 In the introduction to The Common Vein we use 4 artistic renderings to provide a perspective of the project.  The first rendering (a) portrays a concept of the global whole starting with the hydrogen atom and ending with the sun, in an attempt to create a sense of the continuum and dependency of the parts that make the whole.  The second rendering (b) drawn in black and white reflects measurement and objectivity – science  and mathematics.  Image (c) reveals the day-to-day and practical way we live  – when life is not experienced as an exact science; when we tend to approximate and subjectivity is applied.  Image (d) reflects the mystery  of the whole despite the complexity of the parts.

The traditional method of a non liberal arts professional education is to largely provide the black and white subject matter for study. We are directed to texts providing the standard knowledge of the day, and then given multiple choice tests that all have a correct or wrong answer. This traditional method benefits objectivity since we see and seek in our immediacy a black or white, right or wrong, disease or no disease answer. In creating this practical and necessary brick and mortar educational set up, we are able to standardize performance. This method is necessary to produce with factory type assurance, a product that can perform. It does not necessarily provide us a profound sense of awe and humility.

The world of science researches the 1 + 1 = 2 world of the atom, and the elements, objectively measures a variety of parameters for repeatable consistent results and then makes inferences and postulates the implications.

However Einstein the master of 1 + 1 = 2 science, was humbled by the awe of the harmony surrounding him. “Try and penetrate with our limited means the secrets of nature and you will find that, behind all the discernible laws and connections, there remains something subtle, intangible and inexplicable. Veneration for this force beyond anything that we can comprehend is my religion. To that extent I am, in fact religious.” (Isaacson)

Perspectives in History and Their Influences

The scientific perspective provided by the greats in the biology such as Hippocrates, Aristotle, Galen, Harvey, van Leeuwenhoek, Da Vinci, Vesalius, Bernard Cannon, Watson and Crick have advanced the knowledge of science, biology, and inner workings of the human body.  On the other hand perspectives when incorrect, have led us astray. While Hippocrates and Galen contributed significantly, their humoral theories inhibited progress in medicine for 2000 years.

In the ancient Egyptian and then Greek world, free thought and  Greek mythology  led to significant advancements in the world of biology and medicine including the separation of medicine and disease from the realm of the gods.  This was a significant shift in the paradigms of the day.  Empedocles (490 BC 430 BC) proposed four root elements which constitute all the structures in the world – fire, air, water, earth.  The application of the humoral theory was applied to the human condition in the time of Hippocrates (460 BC to 370 BC), who  suggested that the balance of bodily fluids, (blood, yellow bile, black bile, and phlegm)  influenced health and disease.  The proposed cause of disease was an aberrant diet or aberrant activity which resulted in an imbalance of the humors.  This perception and belief was adopted and promoted by Greek, Roman,  Islamic,  and later Western European physicians and philosophers, and misled generations for 2000 years.  From where we stand it was an error in perception. 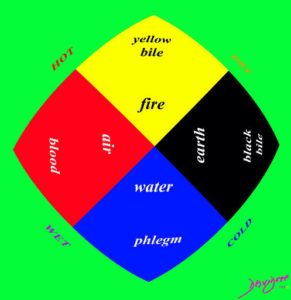 Humoral Theory of Ancient Greece
The physical elements of water fire earth and air with their correlative body elements of phlegm, yellow bile, blood, and black bile corresponding to physical elements of hot cold wet and dry were used to try explain the human condition in health and disease. A balance of the body fluids related to health and an imbalance to disease. Imbalances were thought to be caused by external elements such as aberrant diet or activity.

Galen (131-201 AD) also perpetuated the idea of the humors controlling bodily function, but also proposed, on no sound basis, that the humors were formed in the body rather than being ingested.  These proposals were of course the result of an ill-founded perception by a respected person and adopted as truth by followers.

The perception that the humoral theory was central to biology and medicine started to become questioned as scientific exploration surfaced in the 1800’s .  Yet the use of blood-letting and purges to get rid of harmful excesses of humor, was still in common practice in the early 1800’s .

On the Nit Nat Matter of Matter

In the evolution of understanding matter, the Greek Leucippus and his student Democritus (460-370 BC) perceived the presence of an atom – invisible and indivisible.

In the middle ages religious perceptions dominated and atomic theory  was rejected because materialism was equated with atheism.

After the Renaissance the likes of Robert Boyle (1627-1691) considered one of the founders of modern chemistry perceived the atoms to have specific shapes .

Based on his observation and experimentation,  Sir Isaac Newton (1642-1727)  perceived that the world was made of small solid masses in motion.

John Dalton (1766-1844) defined measurable properties of mass based on his studies and in his book  “A New System of Chemical Philosophy” perceived the atomic theory and the atomic world unfolded.  Dalton did his 1+1 = 2 work in the laboratory and came up with a concept that were in line with  his observations.  The quality of his science and the purity of his mind allowed the perception to hold water and express an element of truth.

Ernest Rutherford (1871-1937) perceived a central nucleus with a cloud of electrons surrounding the nucleus.  He discovered the proton.

Niels Bohr (1885-1962) perceived the electrons traveling around the nucleus in circular orbits bound to the nucleus by electrostatic forces.

These great people in science used the 1+1 =2 of disciplined experimentation to create  a perception of the structure of the atom – a combination of science and imagination.

In the world of the planets Aristotle perceived that the earth was the center of the Universe and this geocentric misconception was perpetuated for years.   In the dark ages the western world was forced to be in awe of the  1 +1 = 1  provided by religion and  the power of the church perceived humanity and the earth as the center of the Universe.  This was an ill-founded perception based on  the awe and the respect of the religion of the day.

Copernicus (1473-1573)  had new ideas based on 1+1 =2 observations  and recognized that the earth revolved around the sun based  and published in “On the Revolutions of the Celestial Spheres” in 1543.  This landmark publication by one person changed the false geocentric perception held for generations to the more accurate heliocentric position of the earth

Galileo improved the telescope, thus improving observational astronomy enabling the concept that the  other planets seemed to follow some patterns in their orbits around the sun and that the earth exhibited.  Galileo believed these orbits were circular.

Johannes Kepler (1571-1630)  improved the refracting telescope and based on his observations and measurements he predicted that  the orbits were in fact elliptical and not spherical.

Sir Isaac Newton  (1642 -1727) proposed that a force he called gravity forced elliptical orbits of the planets around of the sun.

These great people used disciplined science, aided by by advancing tools such as the telescope to make more accurate measurements. They combined the science with ingenious imagination, to create  makeup of the heavens – extrapolating what was in front of their eyes to perceive the structure of the heavens.

On the other side

In periods of darkness in the world, such as the dark ages, where religion was the epicenter of humanity.  The equation 1 + 1 = 1 dominated.  Awe and magic reigned and the creativity both in science and in art was stifled.

The renaissance was a time  when the world was presented with new ideas that resulted in a fine balance of 1+1 = 2 and 1 +1 = 1.   Art music and literature flourished and life and the culture seemed inspired and satisfied but still not without tensions created by people such as Savanarola and sometimes the Popes.

We are in the year 2018 and one wonders where we are with our perceptions, what is true and what is not,  and what lies on the horizon.  Our science seems to have advanced significantly in the western world and we are held in awe by music and poetry and art and dance and we continue to stand in awe of nature and the universe.

A brief history – 2.5 minutes of images from big bang to today http://marcbrecy.perso.neuf.fr/history.html